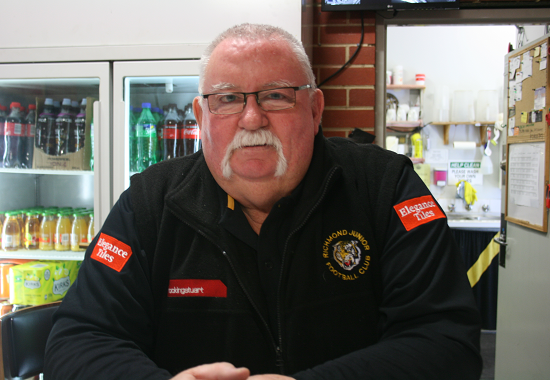 Mick Young is a Life Member at RJFC.  You get to be a life member by working hard.

He has the title of Canteen & Pavilion Manager. Yet Mick is a whole lot more than that. You have probably spoken to Mick when ordering from the canteen on a game day, or during a training night at Citizens Park. Mick knows a lot about the workings of RJFC.

Mick has been at RJFC for 18 years. He adopted the canteen from Jeff who ran it for 15 years prior to him. They weren’t always good years then.  A friend of Les Quarrell got him into RJFC. There were 2 football teams. What we now know of as the club rooms weren’t there then, they operated out of the baby health centre building on the south west corner.

You have to want to work to help the club. Mick is happy to have anyone helping who wants to help out. There’s no silly questions here & if you don’t try it, you won’t know.

Mick has lived his whole life in Richmond. Grew up in Lennox St. Went to school at St Ignatius, then Richmond Tech which used to be where the new Richmond High School sports facility is now.

He played footy at Burnley Oval in the YJFL in school footy. Played wing or forward pocket. Only played a few games as got hurt playing. Still wore the Richmond jersey. Likes everything about footy. Goes for Richmond. Likes the AFLW, but will like it a lot more next year when Richmond come into the competition. It’s the best thing that’s ever happened to football, as you can see here at RJFC with all the more people joining & when we get bigger rooms we’ll take off even more. It’s helping the women & it’s helping football. A lot of people still don’t know we have girls playing for the club. He is often asked about it.

Mick is a community minded man with 3 grandchildren.