It all kicked off at our treasured Citizens Park, still home of the Tigers. Best not to go looking for any black jumpers with yellow sashes. Our original jumpers, and they were real woollen jumpers, were yellow with a black “V” adorning the neck.

We played in what was then known as the Hawthorn Districts Junior Football League.

In that period of time we have proudly won 21 Premierships.

The club rooms, if they could be called that, were some rickety buildings near what it now the health centre at the Church Street end of the ground. Stories about these rooms paint a very sparse picture, with not so much a wall between opposing teams,  rather more a cloth divider. Fortunately the newly renovated Jack Dyer Pavilion is due to open in 2022.

So far we have produced two AFL players – Tom Roach in the men's and Tilly Lucas-Rodd in the AFLW.

The club has been well served by many volunteers during its life so far. While the long serving one’s are remmebered on our Life members honour board, if we had a board large enough we’d like to mention all those parents and supporters that have taken on countless volunteer tasks week to week, year to year to support their son's or daughter's journey with RJFC.

Most importantly, we strive to continue to provide the local boys and girls an opportunity to learn and participate in a support team based environment.

The story of RJFC is far from complete…..We look forward seeing or current stars write new history, and would love to hear from past players/officials if they have any RJFC history. Please contact the web site administrator. 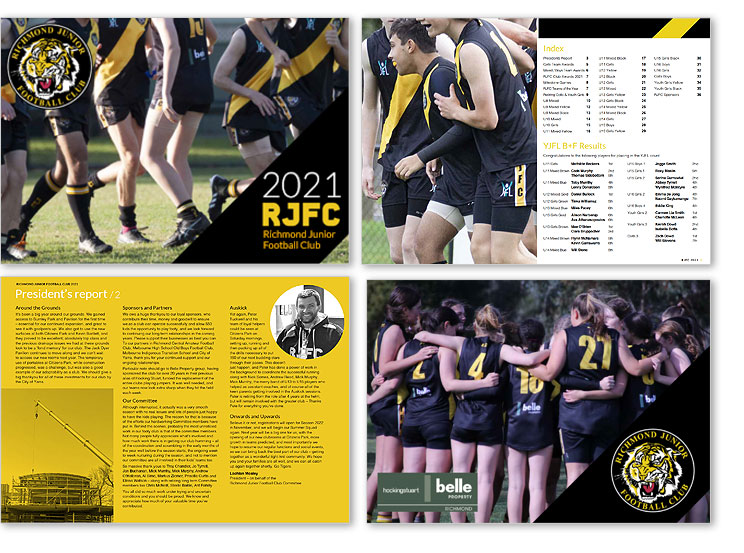 and BFGD... (before graphic designer)