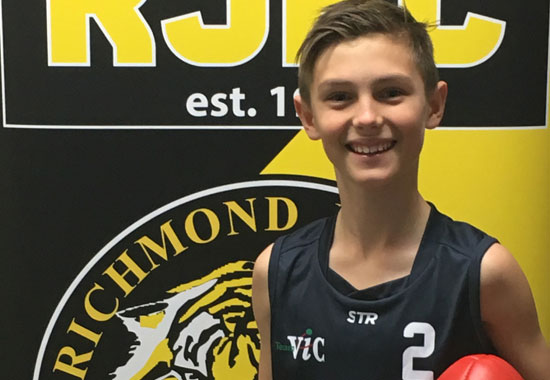 Its official – 2017 is a record year for representative level achievement for RJFC !

Equally as impressive, the lead up to the season saw similar record numbers participating in development squads and tryout sessions. The representative class of 2017 is quite an honour roll. In age group order, we congratulate:

Congratulations to Ubil Chol on making his debut for the Oakleigh Chargers, a strong breeding ground for so many future AFL draftees. Ubil is the first RJFC player to be chosen for the Chargers since Richmond AFL player Tom Roach in 2002. We hope it’s a good stepping stone for a few games next year too.

Congratulations to Jagga Smith also, who is the first RJFC player we know of to represent the Big V. Jagga has been chosen in the top 22 U12 players in our state, as an underage U11. A fantastic achievement for our talented hard worker. We hope you have fun in Darwin and show them what you can do.

We’re sure you all have and will represent your family, the RJFC and yourselves terrifically at your respective games. Please remember to bring back any learnings from the look at footy at a higher level and pass them onto to your team mates so they too can progress their football journey.

RJFC always looks to balance talent development with maximising participations (with a sense of fun and community) so its really quite fitting in a year we have our highest participation numbers, we equally set a new benchmark for representative players.

Well done to all.